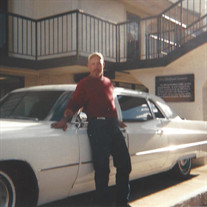 Tommy Hall, age 52 of Abbeville, passed away Saturday, December 23, 2017 in the Phoebe Putney Memorial Hospital. Funeral service will be held at 2:00 PM Thursday, December 28th in the M. G. Frazier Memorial Chapel of Frazier and Son Funeral Home. Visitation will be one hour before the service from 1-2 PM in the chapel. Reverend Rodney Gibbs will officiate. Interment will be in the family plot in the Salem Cemetery in Fitzgerald. Mr. Hall was born on September 13, 1965 in San Bernardino, California. He was retired from Pitts Woodyard and was a member of Salem Baptist Church. He was preceded in death by a son, Dustin Hall in 2004. Survivors include: father and mother-William T. and Jeanette Hall of Abbeville, wife-Alice Hall of Abbeville, sons-Brandon Hall of Tifton, Trever (Taylor) Hall of Savannah, step-sons-Stephen Gordon, Jr. of North Carolina and Bryan Futch of Fitzgerald, step-daughter-Stephanie Gordon of Abbeville, brother-Jeff Hall of Rochelle, sisters-Linda (Sonny) Davis of Sweetwater, TN, Laura Crower of Sweetwater, TN, Mary (Ricky) Lewis of Columbus and Melissa (Troy) O’neill of Abbeville and 6-grand-children. Two cd’s “If Tomorrow Never Comes” and “Unanswered Prayers” will be played. Pallbearers will be: Gary McDaniel, Brandon Smith, Henry A. Mitchell, Eric Filmore, Andy Walden and Charles Alvin Hall. Frazier and Son Funeral Home in Rochelle is in charge of arrangements. Please sign our online registry at www.fraziersonfuneralhome.com

The family of Tommy Hall created this Life Tributes page to make it easy to share your memories.

Send flowers to the Hall family.