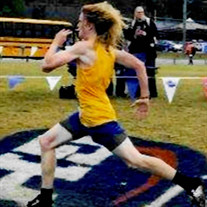 Mason Thomas Harris, age 17, of Rochelle, went to be with his Savior on Sunday, July 18, 2021. Funeral services will be held at 11:00 a.m., Saturday, July 24th, at the Wilcox County Hight School Gymnasium. There will be a private interment in the family plot in the Siloam Cemetery. Mason is the son of Billy and Dawn Harris. He was born February 3, 2004, in Hawkinsville, Georgia, and he lived in Wilcox County his entire life. He was a member of the First Baptist Church of Rochelle, and was a student at Wilcox County High School (WCHS) where he would have been a senior this upcoming school year. Mason excelled at most everything that he chose to do and had many distinguished accomplishments in academics, music, and sports. Mason was an honor student at WCHS and was a member of the Beta Club. He most recently was chosen to be a graduation marshal for the 2021 WCHS graduation because of his high honors academic standing. He was enrolled in the WCHS honors dual enrollment program where he was earning college credits while in high school. Mason was a member of the WCHS Tri-M, and he was to be the president of this honor society for the musicians for the 2021-22 school year. Mason was also a member of the WCHS Patriots for Christ and Future Farmers of America (FFA). He was a member of both the WCHS cross country and track teams. Mason was an avid runner and ran ten plus miles most every day. This passion began in 2019 when he ran track. In the same school year, his passion for running increased when WCHS began its first cross country team and Mason participated as a sophomore. Mason’s skill and dedication to running led him to success in every event. In the fall of 2020, during his junior school year and second season of cross country, Mason was the first-place region cross county champion for region 4A and went on to place third in the Class A cross country state meet. His cross country personal best record in competition was 17:07, but he had already broken the 16-minute mark for the WCHS cross country trail practice. During the spring of the 2021 track and field season, Mason won first place at region in the 1600m with a personal record of 4:51. In the 3200m event, he placed first at region, third at sectionals, and third at the Class A state meet with a personal record of 10:20. The website, MileSplitGa, named Mason as the fastest upcoming Class A athlete for the 1600, 3200, and 5000 events for 2021-2022. Mason was already being recruited by colleges for his running talent, and he and his parents had made several college visits. In April 2021, Mason participated in the Chasing Jefferson Davis half marathon, which was his first half marathon, and he set a record time for the course. Much to the encouragement and pleasure of his late maternal great-grandmother, Mason began taking piano lessons when he was 12 years old. Mason had a natural inclination towards music and loved to play the piano and keyboard. He was becoming an accomplished musician and served as the keyboardist for the Rochelle First Baptist Church praise team. He played the piano for the church’s men’s day and had a major acting and musical role in the church’s production of “Bow the Knee”. Mason was also an active member of the church’s youth group and enjoyed helping to serve in the church’s food ministry when the school schedule allowed. Mason was a very special young man who was passionate about whatever he did. He had a very unique personality and was a young man of few words. He enjoyed simple things like his coffee that he carried with him often. He would often slip off from the chaos of large family gatherings and could be found drinking coffee or playing the piano. He was generous and kind, and it was not uncommon for him to bestow family members with simple gifts or a pat on the head, which was his quiet way of showing his love for them. He had long red hair, which he became known for, as it made him easily recognizable as he participated in competitions across the state and while training on the roads of Wilcox County. He was employed by the Wilcox County School’s Athletic Department where he performed many duties, including setting up for and cleaning up after sporting events. He performed these duties with the same dedication he gave to his studies, running, and music. Mason is survived by his parents, Billy and Dawn; his five siblings, Dawson Harris, Eli Harris, Owen Harris, Emma Harris, and Ryley Harris; his maternal grandparents, Mark and Jimmie Lynn Harden of Rochelle; his paternal grandparents, Bill and Joyce Harris of St. Simons; his maternal great-grandfather, Franklin R. "Bobby" Harden of Rochelle, and a special aunt, Heather Harden of Abbeville. Mason is also survived by many other aunts, uncles, and cousins who loved him dearly. Pallbearers will be Mason’s brothers, Dawson, Eli, Owen, and Ryley, and uncles, Jeff Harden, Stevie Harden, and Randall Stubbs. The Reverend Richard Compton, Michael Gibbs, and Phil West will be officiating. In lieu of flowers, please make donations to Open Doors USA.org. in memory of Mason Harris. Frazier and Son Funeral and Cremation Services in charge of the arrangements. Please sign our on-line registry at www.fraziersonfuneralhome.com

Mason Thomas Harris, age 17, of Rochelle, went to be with his Savior on Sunday, July 18, 2021. Funeral services will be held at 11:00 a.m., Saturday, July 24th, at the Wilcox County Hight School Gymnasium. There will be a private interment... View Obituary & Service Information

The family of Mason Thomas Harris created this Life Tributes page to make it easy to share your memories.

Mason Thomas Harris, age 17, of Rochelle, went to be with his...

Send flowers to the Harris family.