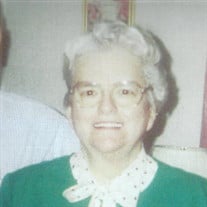 Mary Eleanor (Dasher) Walker age 80 of Rochelle, passed away Saturday, June 4, 2016 at her residence. Funeral services will be held at 2:00 PM Tuesday, June 7th in the M. G. Frazier Memorial Chapel of Frazier and Son Funeral Home. Visitation will be 30 minutes before the service in the chapel. Reverend Robert Cravens will officiate. Interment will be in the family plot in the Youngs Chapel Cemetery. Mary Eleanor (Dasher) Walker was born on March 2, 1936 to the late Glenn E. Dasher and Ellen (Gaskins) Dasher. She attended Pine Grove, Lowndes County, Ga. She attended the Methodist Church in her community near Hahira, Ga. Until she moved away in 1951. She had lived there from 1942 until 1951 as she remembers her grandparents Fisher and Lilly Gaskins. She was converted in the Wesleyan Methodist Church in Cordele, Ga. In 1957. She was a faithful helper to him since he entered the ministry. Their first pastorate was in Ashburn, Ga. in 1959. Mitchell retired from full pastoring in 1998. Their travels took them to 6 different states in the pastoring. Her traveling has been to do the bidding of the Lord Jesus Christ and her failures have been her own fault. She leaves her love to her husband who has been a faithful strength to her. She leaver her love to her children to whom she gave care. She leaves her love to her daughter-in-law to whom she gave her son. She leaves her love to her grandchildren a path to follow. She leaves her love to her great-grandchildren the courage FOR THE FUTURE. She leaves to her relatives a hope in the Lord Jesus Christ. She leaves to her friends far and wide in the church a vision of the Lord Jesus Christ. Survivors include: husband-Mitchell Allen Walker, daughter-Bonnie Sue Walker, sons-Charles Allen Walker and Roy Walker who died December 27, 1952, Sisters-Sara L. (Dasher) Touchton and Kathy (Dasher) Millirons, brothers-Edwin S. Dasher who died February, 2007, William J. Dasher and Fred Johnson, grandchildren-Charles Allen Walker, Jr. and Starla (Walker) Parnell, great-grandchildren-Savannah, Danielle, Cody, Kathlyn, Emily, Caleb and Rachel, great-great-granddaughter-Sheridan. Frazier and Son Funeral Home in Rochelle is in charge of arrangements. Please sign our online registry at www.fraziersonfuneralhome.com

The family of Mary Eleanor Walker created this Life Tributes page to make it easy to share your memories.

Send flowers to the Walker family.