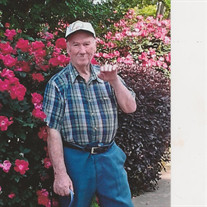 Leonard W. Faircloth, age 83 of 670 Gordon St., Rochelle, passed away Thursday, March 5, 2015 at his residence. Funeral services will be held at 3:00 PM Sunday, March 8, 2015 in the M. G. Frazier Memorial Chapel of Frazier and Son Funeral Home. Reverend Brent Duncan will officiate. Visitation will be one hour before the service in the chapel from 2-3 PM. Interment will be in the family plot in Union Cemetery. Mr. Faircloth was born on July 25, 1931 in Rochelle, Ga. He had lived in Miami, Florida until 2006 when he moved back to Rochelle. He was a member of the First Baptist Church of Rochelle. He was in General Warehouse Management with Westinghouse for 32 years and Phillips Lighting for 10 years. He was employed at the Miami Airport as a Security Officer with Miami International Airport. He was preceded in death by his wife, Margorie Bond Faircloth, a daughter-Joy Williams, a brother-Loyd Faircloth and 3-sisters-Lois Myrick, Lottie Lue Gordon and Lorene Lamb. Mr. Faircloth had a huge heart for cats and any stray animals he could help. He was an avid gardener having won many awards from the Alberta Crummey Garden Club for Garden of the Month. He was a very loving, caring and giving father and an avid sports fisherman. He will be missed by many. Survivors include: sons-Leonard Faircloth of Miami, Florida and David Faircloth of Atlanta, daughters-Sharon Cunningham of Rochelle, Cindy Faircloth of Tenn, and Carol Faircloth of Rochelle, 10-grandchildren and 12-great-grandchildren also survive. Pallbearers will be: Bobby Faircloth, David Faircloth, Brady Gordon, Bobby Barnwell, Jeremy Barnwell, Bobby Barnwell, Jr., Jason Barnwell and Roger Crabb. Frazier and Son Funeral Home in Rochelle is in charge of arrangements.

The family of Leonard W. Faircloth created this Life Tributes page to make it easy to share your memories.

Send flowers to the Faircloth family.