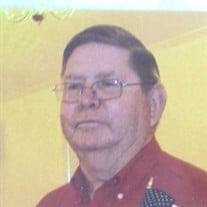 Joseph D. “Papa Joe” Henderson, age 73 of Abbeville, passed away Saturday, April 4, 2015 in the Tift Regional Hospital. Funeral services will be held at 11:00 AM Monday, April 6th in the Tabernacle Baptist Church. Reverend Ralph Griffin and Reverend Roy Taylor will officiate. Visitation will be 2 hours before the service in the church. Interment will be in the family plot in the Siloam Cemetery. Mr. Henderson was born on May 25, 1941 in Rochelle, Ga. He was son of the late John Henry Henderson and Hazel Hollingsworth Henderson. He was a member and deacon at Tabernacle Baptist Church where he was also a member of the church choir. He was former member of the Western Light Masonic Lodge #272. He was a retired employee of Delphi Automotive where he was a machine operator. He was Valedictorian of his Abbeville High School Graduating Class. He was an avid fisherman and was very dedicated to his family and friends. He served his country with honor in the United States Reserves. He was preceded in death by his former wife, Rebecca Henderson and step-mother, Lunelle Henderson. Survivors include: wife-Frances Weldon Shedd Henderson of Abbeville, son-Dennis (Tara) Shedd of Abbeville, daughter-Teresa Preast of Hawkinsville, brothers-Ed (Joann) Henderson of Dearing and Charles (Rhonda) Henderson of Abbeville, sisters-Mary (John) Rhodes of Abbeville and Alice Bostic of Abbeville, grandchildren-Charity Dowdy, Toby Dowdy, Trenton Dowdy, Maggie Shedd and Mollie Shedd and great-grandchildren-Jed Dowdy and Ty Dowdy. The family request that instead of flowers that donations be made to the Hospice of Tift Area, P. O. Drawer 747, Tifton, Ga. 31793. Frazier and Son Funeral Home in Rochelle is in charge of arrangements.

The family of Joseph D. "Papa Joe" Henderson created this Life Tributes page to make it easy to share your memories.

Send flowers to the Henderson family.