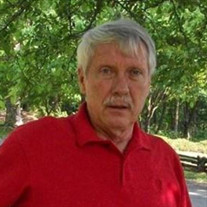 James Ronald “Ron” Tishaw – Graveside service for Ron Tishaw, 77 of Ellijay, Ga., formerly of Pitts, Ga. will be held at 1:00 PM on Saturday, July 10, 2021 in the Pitts, Georgia. Cemetery. The Reverend Richard Compton will officiate. Frazier and Son Funeral Home and Cremation Services in Rochelle, Ga. is in charge of the arrangements. Mr. Tishaw died Thursday, July 1, 2021. He was born in Decatur, Ga. Atlanta Navy Hospital on August 5, 1943. He was the son of the late Elwyn Titshaw and Marjorie Chambers Titshaw. Ron attended the University of Georgia then left to join the United States Air Force serving in Alaska, after which he returned to college and graduated from Troy University in Alabama. He began his career with American Honda Motor Co. as a Parts and Service District Manager, and worked with other car companies including Nissan and Isuzu. He had established his residency in Ellijay, Ga. so when he retired he took a job in Gilmer County as a manager in the Waste Management Division and was responsible for placing many of the Waste Stations throughout the county. He liked to travel and had lived in Quepas, Costa Rica and Florida. He loved Ellijay and said many times, out of all the places I have lived, I am happiest here. Besides his parents, he is preceded in death by his brother, Michael Titshaw. Survivors include two sons, Mitchell (Tonya) Tishaw and Eric Tishaw all of Alabama. He had six grandchildren and two great-grandchildren. He was of the Christian Faith with Baptist membership. Ron loved to read and was a talented writer, having published four books. He loved horses, hiking, running, music and especially SEC football, Alabama being his #1 team. Ron will be missed very much by his many friends and family. In lieu of flowers, donations may be made in his memory to the Pitts Cemetery Fund, 113 Cleveland Avenue, Pitts, Ga. 31072.

The family of James Ronald "Ron" Tishaw created this Life Tributes page to make it easy to share your memories.

Send flowers to the Tishaw family.