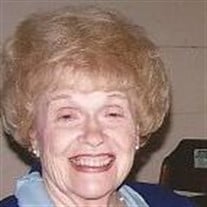 Carolyn Shackelford Hammond, 92, of Abbeville, died Tuesday, June 12, 2018, at her home surrounded by family. Funeral services will be held at 2 PM, Friday, June 15, at Abbeville First Baptist Church. Visitation will be one hour before the service, from 1-2 PM in the church. The Rev. Chuck Taylor and the Rev. Tommy Baker will officiate. Burial will be in the family plot at Stubbs Cemetery. Mrs. Hammond was born Sept. 9, 1925, in Abbeville to Ola Warren Shackelford and William Charles Shackelford. A member of the first graduating class of Abbeville High School, Mrs. Hammond went on to study music at Tift College and the University of Georgia. She was blessed with a musical ear. A lady of strong faith, Mrs. Hammond offered up her talents to the Lord with every service at Abbeville First Baptist Church, where she served as organist and pianist for 64 years from 1949 - 2013. Following in her grandmother’s footsteps, she was an avid artist. Her paintings are treasured and will be passed down as heirlooms by family and friends. Mrs. Hammond was married to the late Jack C. Hammond for 66 years. The two fell in love through handwritten notes, thousands of miles apart during the throes of World War II. As Mr. Hammond was recovering from his wounds in a hospital in Abbeville, France, he made friends with the solider, James Wilson. James told Jack of a beautiful Southern belle from his hometown of Abbeville, Georgia and encouraged Jack to write to Carolyn. After the victory of WWII, Jack made his way to Abbeville, Georgia, where he held Carolyn in his arms for the first time and the two were married July 7, 1945. Mrs. Hammond was a pillar in her community and was an active member of many civic and social clubs. She was a founding member and co-president of the Wilcox County Arts Council, actively involved in the Woman’s Missionary Union and a member of the Martha McLeod Chapter of United Daughters of the Confederacy. She taught piano lessons in public schools for 20 years, and private piano and art lessons to children and adults for more than 40 years. She was a member of the B# Band and enjoyed offering her talents for many performances. Mrs. Hammond worked with her husband as bookkeeper of Hammond’s Fine Furniture, Appliances and Antiques for more than 60 years. Mrs. Hammond’s proudest accomplishment was her family. Affectionately called “Big Mom”, she was a loving and devoted wife, mother and grandmother. Big Mom was known for her grand smile, warm hugs and loving heart. She is survived by her daughter, Kathy (William) Dozier, daughter-in-law, Jan (the late Dr. William “Bill”) Hammond; sister, Sujette S. Taylor; 6 grandchildren, Dr. Kaine (Lindsey) Brown, Heather (Alan) NeSmith, Kacey (Jenni) Brown, Will (Laura) Hammond, Taylor (Brittany) Hammond and Chandler Hammond; and eight great-grandchildren, Kameron Brown, Katelyn Brown, Luke Brown, William NeSmith, Fenn NeSmith, Lucy Brown, Rhodes Hammond and Liam Hammond. Other than her parents, she was preceded in death by her husband, Jack C. Hammond, son, Dr. William “Bill” Hammond, and grandson, Kent Dozier. Pallbearers will be her grandsons, Dr. Kaine Brown, Kacey Brown, Will Hammond, Taylor Hammond, Chandler Hammond and Alan NeSmith. In lieu of flowers, the family requests donations be made to Abbeville First Baptist Church, P.O. Box 385, Abbeville, GA 31001, or Wilcox County Arts Council, C/O Edwin Lee, 627 Wayne Road, Abbeville, GA 31001. Frazier and Son Funeral Home is in charge of arrangements. Please sign our online registry at www.fraziersonfuneralhome.com

Carolyn Shackelford Hammond, 92, of Abbeville, died Tuesday, June 12, 2018, at her home surrounded by family. Funeral services will be held at 2 PM, Friday, June 15, at Abbeville First Baptist Church. Visitation will be one hour before the service,... View Obituary & Service Information

The family of Carolyn Shackelford Hammond created this Life Tributes page to make it easy to share your memories.

Send flowers to the Hammond family.