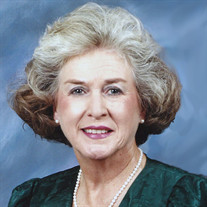 Carol K. Harden, age 81 of Rochelle, passed away Saturday, May 19, 2018 in the Medical Center Navicent Health in Macon. Funeral services will be held at 11:00 AM Tuesday, May 22nd in the First Baptist Church of Rochelle. Visitation will be from 6-8 PM Monday, May 21st in the social hall of the First Baptist Church. Interment will be in the family plot in the Siloam Cemetery Mrs. Harden was born January 20, 1937 in Abbeville, Georgia. She was the daughter of the late Marvin Keene and Edith Baker Keene. She graduated from Abbeville High School in 1954 and that same year she was crowned Miss Abbeville and Mrs. Wilcox County. She then attended Valdosta State College where she majored in Music. She was a member of the Valdosta State College Glee Club and was part of a select group of singers that traveled and performed known as the Serenaders. She was known for her beautiful voice which she graciously shared at countless weddings, funerals, and other occasions through the years. Later she obtained her master of English education degree from Valdosta State College. She was a teacher at Wilcox County High School for 37 years where she taught English at all levels and was the director of the chorus. Mrs. Harden was selected as the Wilcox County Star Teacher by eight different STAR students through the years. She officially retired from teaching in 1998, but continued on as the chorus director for several more years. Additionally, Mrs. Harden taught night classes for Brewton Parker College. Mrs. Harden was an active member of many civic and social clubs in Wilcox County. She was a charter member of the Wilcox Rifles Chapter of the UDC. She was also a member of the Dogwood Garden Club and the Daughters of the American Revolution (DAR). She served in leadership positions in these organizations for many different terms throughout the years. In 1982, Mrs. Harden was honored as the Wilcox Woman of the Year for her work in the community. Mrs. Harden was a founding member of the Wilcox County Arts Council (WCAC) and was among the group who was instrumental in the WCAC purchasing and renovationg the old Abbeville School to serve as the home of the WCAC. She served as president and co-president of the WCAC until 2016. In the fall of 2017, the WCAC honored Mrs. Harden for her work in the WCAC by hanging a portrait of her in the WCAC building. She was a charter member of First Avenue Baptist Church in Rochelle and served as choir director for many years. Currently, she was a member of the First Baptist Church of Rochelle where she sang in the worship choir, the Golden Voices, and just this Easter, she sang in the First Baptist Church of Rochelle Easter drama, "Bow the Knee." Mrs. Harden was an enthusiastic walker for many years, walking three to four miles a day. She said this was her time to pray for her children and grandchildren. She was an avid gardener, loved her flowers, and spent many hours working in her yard. She was a two time cancer survivor. Despite her professional and civic involvement and achievement, Mrs. Harden's proudest accomplishment was her family. Mrs. Harden is survived by her husband, Franklin R. (Bobby) Harden. They would have been married 61 years in June 2018. Mrs. Harden was a loving and devoted mother. She often stated how blessed and thankful she was to have her children, grandchildren, and great grandchildren all living close by so that she could see them often, and until her health began to decline, prepared lunch every Sunday for all of her family even when its number grew to 26 members. She loved to tell anyone who would listen how proud she was of her children, grandchildren, and great grandchildren. This was even evident in what became her last days as she, to the amusemnt of her family, frequently diverted the work of the doctors and nurses to tell them about one of her children or grandchildren. She is survived by her four children, Mark (Jimmie Lynn) Harden, Jeff (Lynn) Harden, Susan (Randall) Stubbs, and Stevie (Lisa) Harden all of Wilcox County, nine grandchildren, Dawn (Billy) Harris, Heather Harden, Jeffrey Harden, Justin (Kristin) Harden, Caroline Stubbs, Lauren Stubbs, Abigail Harden, Ansley Harden, and Anna Carol Harden and seven great grandchildren, Dawson Harris, Eli Harris, Owen Harris, Mason Harris, Emma Harris, Ryley Harris, and Hinleigh Harden. She is survived by two brothers and two sisters, Kenneth (Frances) Keene of Macon, Lanier (Mildred) Keene of Abbeville, Wanda (Howard) McGlamory and Sherrie Lovett both of Abbeville, as well as a host of nieces and nephews. Pallbearers will be her two grandsons and five great grandsons. The Reverend Phillip West and grandson-in-law, Reverend Billy Harris will be officiating. Kay Dorsey will play prelude and postlude. Vickie Brown will sing "It Is Well With My Soul" and "I Bowed on My Knees and Cried Holy". Frazier and Son Funeral Home is in charge of arrangements. Please sign our online registry at www.fraziersonfuneralhome.com

Carol K. Harden, age 81 of Rochelle, passed away Saturday, May 19, 2018 in the Medical Center Navicent Health in Macon. Funeral services will be held at 11:00 AM Tuesday, May 22nd in the First Baptist Church of Rochelle. Visitation will... View Obituary & Service Information

The family of Carol K. Harden created this Life Tributes page to make it easy to share your memories.

Carol K. Harden, age 81 of Rochelle, passed away Saturday, May...

Send flowers to the Harden family.