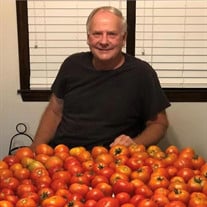 Aaron Glenn McDuffie, age 70, of Abbeville, passed away Wednesday, July 21, 2021, in Warm Springs, Georgia. He was born December 8, 1950, in Hawkinsville, Georgia, to J.T. and Erline Guinn McDuffie. He graduated from Wilcox County High School in 1969 and from South Georgia Technical College in 1972. He retired from Robins Air Force Base with 40 years of service in electronics/software. Glenn accepted the Lord at Cedar Creek Baptist Church and was baptized in Cedar Creek in an area called Tony Ford. He was a member of Cannonville Baptist Church where he enjoyed serving as Chairman of the Deacons and teaching the adult Sunday school class. He was a former church treasurer and member of the building committee. He took great pride in helping renovate the church social hall this summer. He also served as a volunteer for Cedar Creek Fire Department. Glenn was a current member of the Wilcox County Tax Assessor Board. Glenn loved his family, his friends, and his church. He could frequently be heard whistling especially while working with his cows and in his garden. Some of his favorite past-times included watching western movies, grilling, and listening to music from the 50s and 60s. Glenn was never without his pocket knife. He entertained his grandchildren, always riding them around on the tractor, swimming with them in the pool, or selflessly doing anything they wanted to do. Glenn led by example in teaching his children and grandchildren the value of honesty, hard work, and the importance of a good education. Rarely did you see him without his devoted wife, Janie. Cedar Creek Community lost an exceptional man, and he will be greatly missed. Glenn was preceded in death by his parents, his father-in-law and mother-in-law, Robert and Sadie McClain, and a son-in-law, Buddy Clements. Survivors include his wife of 49 years, Janie McClain McDuffie; a son Jason McDuffie (Madalyn) of Forsyth; his three daughters, Kim Clements, and Erin Wells (Westley) of Abbeville, and Morgan Garrett (Brandon) of Woodbury; two brothers, Johnny McDuffie (Marcie) of Peachtree City, and Stephen McDuffie (Barbara) of Abbeville; a sister, Carol Adams (Danny) of Auburn, Ala.; and his grandchildren, Kaysie and Nelson Clements, Lyla Scott and Carlyn Wells, Monroe, McClain, and Miller Garrett, Adeline, Pierson, and Sarah Channing McDuffie. Funeral services were held on Sunday, July 25th, at 2:00 p.m. in Cannonville Baptist Church, with Rev. Johnny McDuffie and Rev. Joel Owens officiating. Interment was at Cedar Creek Cemetery. Visitation was from 1:00 – 2:00 p.m. at Cannonville prior to the service. Pallbearers were grandson, Nelson Clements; nephews, Brandon McDuffie, Wesley McDuffie, Greg McDuffie, Colton Farrow, Cameron Clark, Greyson Farrow; and family friends, Johnathan Rhodes and Kolby Phillips. Honorary pallbearers were Cannonville Deasons, Edwin Lee, Bill Ledford, Chris Moorhouse, Shawn Sutton, Heath Wilson; and special friends, Phleet Cohen, Virgil Luther, and Johnny Rhodes. Special music was provided by Kaysie Clements, Joni Wilson, Colton Farrow, and Tim Moorhouse. Frazier & Son Funeral and Cremation Services was in charge of the arrangements.

The family of Aaron Glenn McDuffie created this Life Tributes page to make it easy to share your memories.

Send flowers to the McDuffie family.